Prevention key to defend against pinkeye in cattle
LOGIN 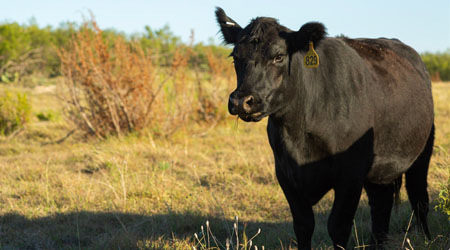 Prevention key to defend against pinkeye in cattle

No, it’s not a new fashion trend, nor is it something your kid (goat or human) gave your cow, but pinkeye is a serious disease that can cause discomfort and, in some cases, even blindness. Along with Bovine respiratory disease (BRD) and scours, pinkeye is among the most common and costly diseases impacting cattle due to the reduced weight gain, decreased milk production and the cost of treatment.

Pinkeye can be difficult to treat if producers are not accustomed to handling cattle regularly, so the best recipe for year-round pinkeye prevention includes vaccination, fly control and good pasture management.

Pinkeye, also known as infectious bovine keratoconjunctivitis (IBK), is a common and highly contagious disease of livestock. Younger cattle that have never been exposed to the bacteria are the most likely to get this disease. There are many factors that increase the risk of pinkeye and contribute to disease spread in cattle.

Face flies, which look like large houseflies, play a dual role in pinkeye. They irritate the eye by causing small scratches on the conjunctiva and corneas of the eyes when they feed, which makes it easier for the M. bovis organisms to attach to the eye tissue and thrive. It becomes a vicious cycle because the excessive watering caused by the damage from the fly also attracts other files.

Once a fly lands on an infected animal they spread the causative agent to other animals. In comparison to horn flies, face flies spend very little time on the same animal. So, one face fly can spread pinkeye to several animals in the same day.

Ultraviolet light from the sun can cause irritation to the eye which makes cattle more susceptible to disease. This is especially true for white-faced cattle where there is no pigment around the eye.

Grasses and other irritants:

Grasses that are headed out, weeds and brush can all be irritants. When cattle eat from the middle of large hay bales, eyes can be scratched or irritated by foreign bodies in the bale. Dust, pollen and chaff can also serve as irritants. Cow tail switches can also cause irritation to calf eyes while the cow is trying to deter horn flies. Many producers will cut the twitch of the tail of cows to prevent the issue.

Typically, the first signs of pinkeye include swelling or redness of the conjunctiva (membrane covering part of the front surface of the eye and the inner surface of the eyelids). Frequent blinking may be noted. In about two days, a small ulcer may appear in the center of the eye. By the sixth day, the entire cornea may be cloudy, and the ulcer may be enlarged. In extreme cases the cornea may rupture. If the cornea doesn’t rupture, healing occurs over time, but the animal may have a large corneal scar that contributes to blindness or partial blindness.

The overall appearance and rate of progression of the disease will vary from animal to animal. Catching symptoms early is key to recovery.

Several treatment options are available and can be used alone or in combination depending on the severity of the individual case. The first principle of pinkeye treatment is to protect the eye. Eye patches or suturing the eye closed temporarily may keep out dust, flies and sunlight. In most cases, pinkeye is responsive to antibiotics. Keep in mind, the disease can spread rapidly within a herd, so affected animals should be isolated if possible.

Be prepared On some farms, a chute might not be available to treat pinkeye, so prevention is of the utmost importance. Treating cattle infected with pinkeye can be straightforward, but a producer should incorporate preventive measures before pinkeye spreads through a herd. This is the only way to minimize risk and provide the widest degree of protection.

Vaccines can be administered before the beginning of fly season (at least 6 to 8 weeks prior to allow for an adequate immune response).

Piliguard® vaccines by Merck Animal Health have a long-standing reputation of aiding in the control of pinkeye in cattle. They are available for use in healthy cattle to aid in the control of pinkeye associated with infection by M. bovis strains. Vaccinating a herd with Piliguard can be an aid for prevention of infections and reduce the severity of infections when outbreaks occur. The Piliguard line includes a variety of formulations so producers can find an option that fits their needs.

M. boviculi vaccine, manufactured by Addison Labs and distributed by Merck Animal Health, is an additional measure of protection you can add to Piliguard for comprehensive protection against both strains of Morexella that cattle may be exposed to.

Another option to take the stress out of pinkeye is with a combination vaccine like 20/20 VISION® 7, which offers the trusted clostridial disease prevention of Vision® 7 combined with protection against pinkeye caused by M. bovis in one convenient dose.

There are many methods to control flies including fly tags, sprays, and dusts. Other products such as feed-through growth regulators include targeted ingredients to inhibit the development of flies. The product passes through the cow’s system to affect the fly larvae in manure, breaking the life cycle and reducing the fly population.

Regular mowing to keep pastures trimmed will help minimize tall grass and weed irritants. Spread the hay out instead of making the cattle reach for round bales or an overhead feeder.

Take-home message The best way to manage pinkeye is to get ahead of it and stay ahead of it. Consult with your veterinarian to develop a program tailored to your operation and remember a broad-based approach that includes vaccination, fly control and pasture management is best.